The later part of the growing season saw a significant increase in foliar and stalk disease in corn plants in many parts of the state.  Diseases observed include tar spot, various Fusarium-induced diseases, northern corn leaf blight, anthracnose stalk rot, and gray leaf spot to name a few.  With the high levels of disease observed in many corn fields comes questions on potential problems with toxins in the feed including corn silage, grain, and utilization of the corn stalks after grain harvest for beef cattle.

The following information helps address these concerns and how to reduce risk from possible mycotoxins. It is important to remember that just because feedstuffs have visible molds does not automatically mean that toxins are present, but it does indicate that there could be risk for toxins.  It is also important to remember that feeds not showing visible mold and spoilage could have toxins present, even at high levels.

To date, tar spot has not been directly linked to any toxin production (Telenko et al., 2021). Tar spot does cause added plant stress that can predispose those plants to other problems, such as infection by toxin-producing fungi. For example, one strain of Fusarium causes Giberella ear and stalk rot in corn and can produce deoxynivalenol (DON). Fusarium does not necessarily infect the ears and stalks to the same degree, and can vary from year to year or field to field, so there could be high levels of Fusarium in the ears and not in the stalks and vice versa (Reed et al., 2021).  Based on this information, we are strongly encouraging producers to test any suspect feeds this year for mycotoxins to know what the status of the feed is, in order to manage accordingly.

Another consideration for using corn stalks as feed this year is that the high disease pressure caused plants to die early in several fields.  Stressed plants and plants that died early likely reallocated (cannibalized) carbohydrates from their stalks to the kernels to try to produce viable grain. This results in weak stalks and lower nutritional value in the stover.  The poor quality stover with higher presence of fungal growth on the leaves may also be less palatable to cattle as well.  To address these potential problems, it may be necessary to provide some supplemental feed to cattle that are grazing corn stalks, or reduce grazing time on poor quality stalks.  Let them find the better-quality material out there, as they tend to do first, and then move them to other fields.

If baling corn stalks to use as feed it would be good to take samples and have them tested for mycotoxins.  Sampling and testing again is also recommended for corn silage and grain that could be at risk.  The cost of sampling and testing is inexpensive compared to the cost of sick and or dead animals. The only way to really know what toxins are present is to test!

If your feeds have elevated levels of toxins, options include diluting with clean feeds to get the toxin level of the total ration to safe levels, use of research-backed binders, or just not using feeds with high levels of toxins.  Work with your nutritionist to determine the best solution for your situation.

Following are links to additional resources to help livestock producers take good samples to submit for testing, frequently asked questions about mycotoxins and a list of laboratories that you can send samples to for testing.

Grain and Silage Sampling for Mycotoxins

Guidelines for Toxin Levels in Feeds

Sampling Hay and Forage for Analysis 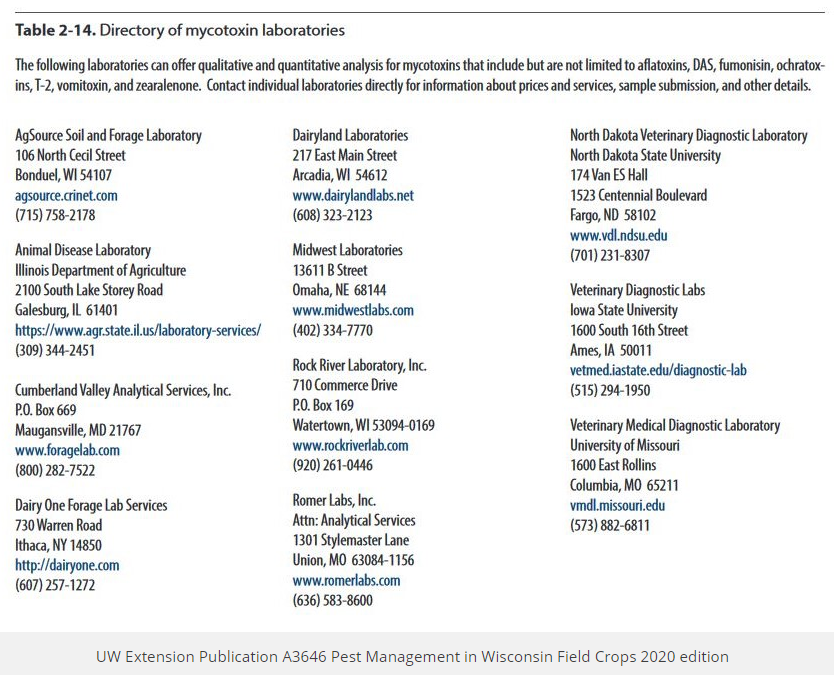