This article was originally published in Wisconsin Agriculturist Magazine.

When corn prices are high, it is common to hear some cattle feeders make the statement that they will have to cut back on the amount of corn and put more roughage in the ration to save money. There is a good chance that this practice may only be providing a false sense of saving money. It is certainly a good idea to look at different feedstuffs for use in rations. When doing so, it is equally important to look at how the animals will perform on different rations to get an accurate picture of all of the potential costs, and ultimately net returns, associated with a different ration.

When reducing the amount of grain or concentrate in feeds and increasing roughage, the energy level of the feed is usually reduced. This strategy leads to lower rates of gain, increased pounds of feed to produce a pound of gain, and more days on feed. The following examples compare two rations, using the same feedstuffs but at different levels to feed Holstein steers from 400 to 1450 pounds and beef steers from 500 to 1400 pounds. The example rations were formulated using the BRaNDS ration software from Iowa State University, which uses the latest NRC Nutrition Requirements to predict animal performance, and the UW-Madison Extension Feedlot Enterprise Budget spreadsheet was used to calculate costs used in the examples. 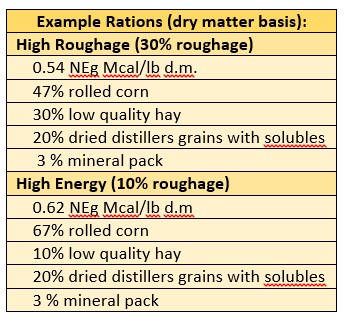 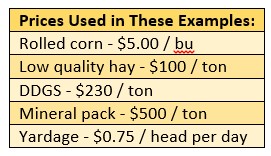 The examples above both show that the cost of feed per head per day is higher for the higher energy, lower roughage ration. However, it is more important to look at the feed cost per pound of gain and the number of days on feed to help evaluate all costs associated with the ration change.  Because the animals are gaining faster and more efficiently on the higher energy ration, their total feed cost and yardage costs are less than on the lower energy, higher roughage ration.

Even in the example of beef steers, where the differences are not as great on a daily basis, it does not take much for the total difference in cost to become substantial. Remember, every additional day on feed has costs beyond feed that are often forgotten about or overlooked. There is the equipment used to feed, bed, and clean pens plus labor, fuel, and utilities, to name a few.

Higher forage rations can have a place in cattle feeding operations. Forages may be best utilized earlier in the feeding program as a grower type ration when cattle are more feed efficient and may fit well with some farms’ resources that grow forages as part of their conservation plans. Still, cattle should be transitioned onto finishing rations before they get too big to produce a desirable finished animal. Sometimes it may also be more profitable to sell the animals before transitioning them onto finishing rations rather than owning them through the finishing period.

It is time well spent to evaluate different rations and scenarios as prices and situations change to optimize profits using the resources the farm has available. When doing so, it is critical to look at all costs impacted by any ration changes, not just ration cost per ton or feed cost per day, to assess costs and returns accurately.

This article was recently published in Wisconsin Agriculturist Magazine.