Now that you have decided to raise range fed broilers for your home use, a niche market or for county fair show, you will need to decide on the heritage breed or hybrid strain that you will raise. 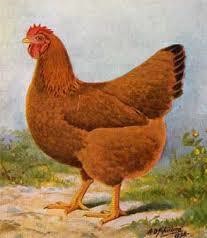 Heritage breeds, particularly American, English and Asiatic breeds, could be a choice for your range fed broilers. However, you will experience the same results that producers saw prior to “The Chicken of Tomorrow” contest. These would include slow growth, low breast meat percentage and low feed efficiency.

Several breeds have natural advantages over others due to selection for meat characteristics when the breed was developed. Buckeyes with their rounded breasts and muscular thighs, due to Cornish and Plymouth Rock genetics, make a suitable choice. Some strains of New Hampshire Reds demonstrate specific meat characteristics such as early maturity, quick feathering, strength and vigor, for which they were developed.

If your “breed” decision is based on economic and carcass quality factors, several alternatives to the heritage breeds are available. 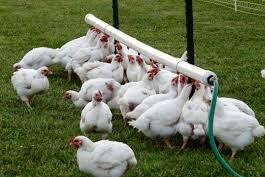 Several strains of white broiler hybrids can be raised on pasture with very acceptable results. Undoubtedly, they will produce very desirable carcasses. Actual tests and anecdotal evidence show that the white broiler hybrid will produce the highest economic return. And depending on the amount of supplemental grain-base feeds that are provided the birds, their rate of gain may be far superior to alternatives.

However, the fast growing, white broiler hybrids have inherent physical deficiencies when raised on pasture. Their extreme breast muscling places the bird’s center of gravity forward and putting strain on their legs and thighs. Their bone and joint development is outpaced by their body mass, resulting in splay legs and ultimately, increased mortality. 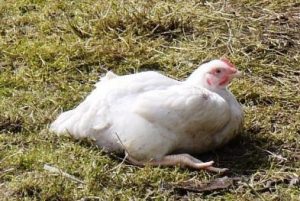 The inflicted individuals can be processed before the conditions get too serious, thus salvaging the carcass.

Many commercial hatcheries offer “Slo-grow” or “Pasture Broiler” chicks. These are marketed by the names “Freedom Rangers,” “Rainbow Rangers” or “Red Rangers.”

An internet search will find several small family-owned hatcheries that exclusively feature chicks that thrive on pasture. Some offer their own-proprietarily bred strains, but most like “Freedom Rangers” are actually Four-way cross hybrids, bred from parent stock that are produced by genetic companies.

Because these birds are terminal cross hybrids, using them for breeding purposes will result in unsatisfactory offspring.

The dramatic increase in demand for pasture-raised strains of broilers chick has caused hatcheries to expand their offerings these types of chicks. Prices for these chicks may be slightly higher than the white hybrid broilers. 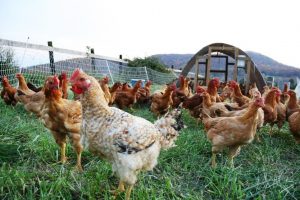